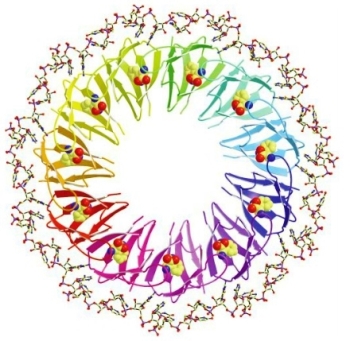 Many bacteria regulate their production of L-Tryptophan (Trp) by a process called attenuation. When Trp is in abundance it would be inefficient to continue production, hence bacteria have evolved a Trp-concentration dependent regulatory mechanism for its synthesis. This mechanism is coordinated by a circular homo-oligomer protein (of 11 or 12 subunits) named Trp RNA-binding Attenuation protein (TRAP), the structure of which was solved in our group (Antson et al., Nature, 1999). In the presence of Trp, TRAP-Trp complex bind RNA and blocks transcription of the trp operon by forming a terminator stem-loop. In the reverse case, an anti-terminator loop is formed and transcription may proceed.

We have solved the structure of the anti-TRAP protein (AT). If uncharged tRNA-Trp levels become high, synthesis of an anti-TRAP protein is increased which forms a complex with TRAP, inhibiting its termination activity. In this line of work we engineered TRAP to alter its oligomeric state (subunit number) and thermal stability.

Regulation of the trp operon by TRAP in bacilli, taken from Antson et al., Nature, 1999.